The category of upper body equipment incorporates a variety of styles and designs that are made to support a child by their hands only. This can include horizontal ladders, ring treks, chinning bars, and other, similar play structures. This kind of playground equipment is popular with all age groups but the CPSC recommends that it is not used by any child under the age of four.

When accessing upper body equipment, the first handhold needs to be between 8 and 10” from the structures access rung, and when the structure is accessed by a platform, the first handhold needs to be within 10” from the platform’s edge. These regulations will make sure that the rungs are easy for children to grab so that they are less likely to fall off the equipment.

Upper body equipment needs to be six feet in all directions, like with other playground structures, but it is also important to keep the ground beneath and around the structure free of any other structures and debris. 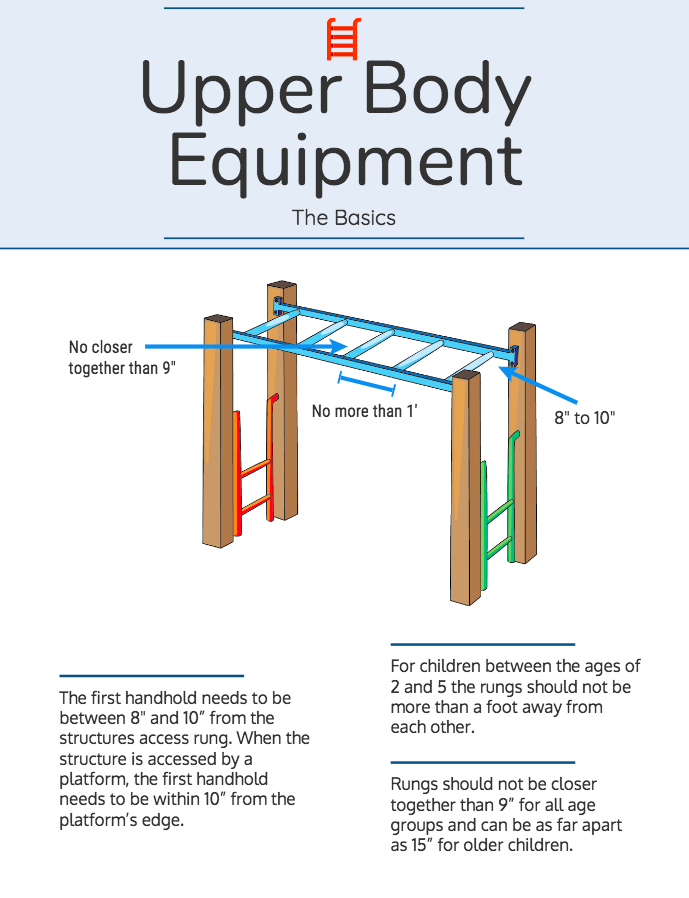 Horizontal ladders are the most common and popular form of upper body equipment found on playgrounds and come in a variety of configurations. The ladders should be designed for the specific age demographic expected to use the equipment. Children between the ages of two and five should not use ladders taller than five feet while children older than five should not use ladders taller than seven feet. This is also a kind of equipment that children in wheelchairs will be able to use, but in order for the ladder to be easily accessible to them, it should not be taller than 54”, or four and a half feet.

Any rungs on this kind of equipment should be between 0.9 and 1.5” in diameter and should not be able to turn or rotate to prevent the equipment itself from causing any falls or injuries. The distance between rungs is another important consideration with horizontal ladders and other kinds of upper body equipment. They should not be closer together than 9” for all age groups and can be as far apart as 15” for older children. Children between the ages of 2 and 5 have a few other considerations. The rungs should not be more than one foot away from each other, they need to be parallel to each other, and evenly spaced.